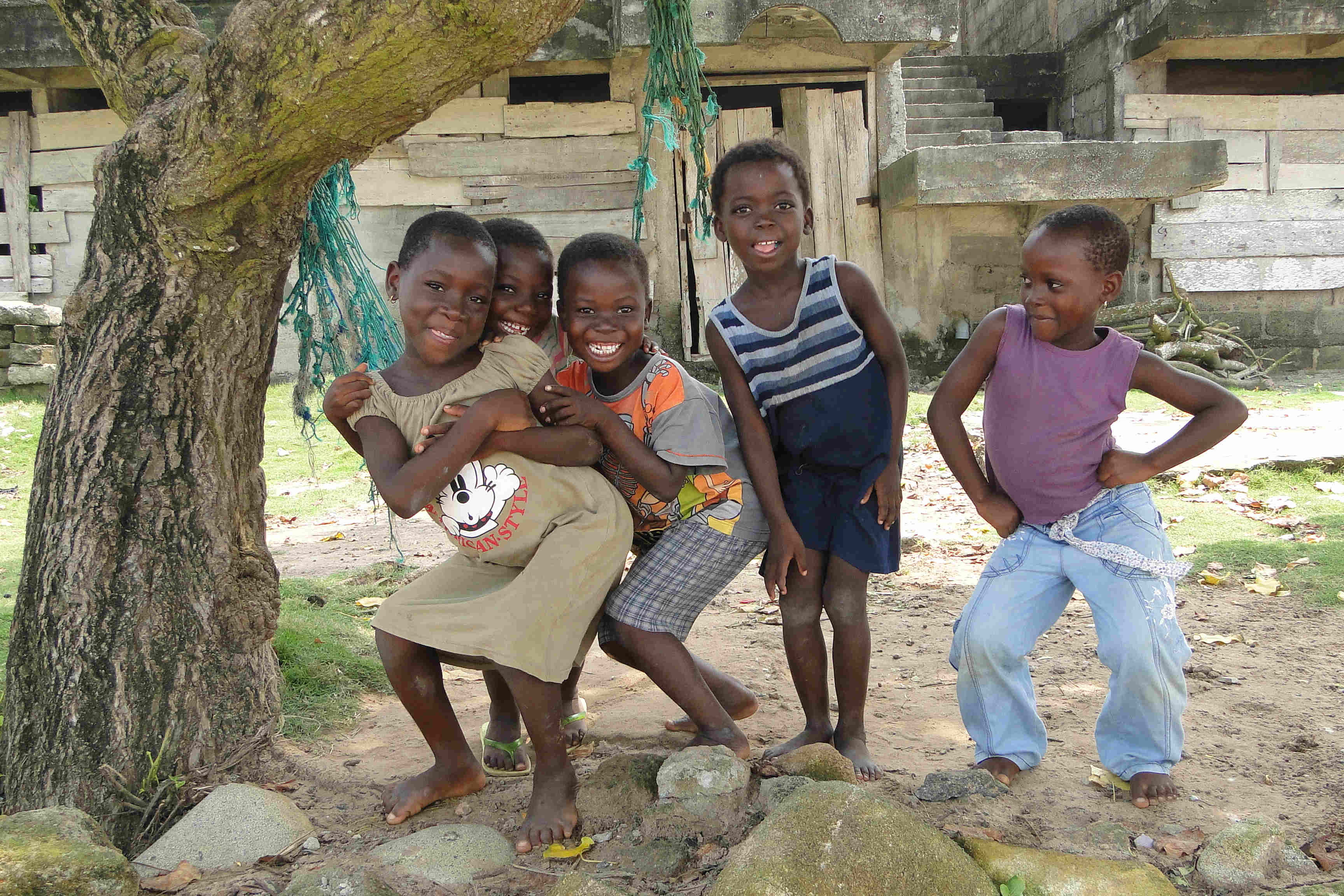 http://buckymoonshine.com/?fbclid=IwAR3P5j0RWhlPcwnpjkka5X1RzD6wGuZPyTpBmD9iziJUmsC1WgD0k-5uoUM Kisi Kessie could not sleep one night. She was mad at Ato. They were friends but Ato had made fun of her in the play yard in front of the other children. Kisi was hurt and didn’t understand why Ato had teased her so.

Kisi lay on her rainbow striped sleeping mat on the family room floor. Auntie sat nearby in a high-backed wicker chair embroidering a beautiful butterfly onto a white blouse. Auntie had noticed Kisi tossing and turning about on her mat.

“Ato said the Baah clan is evil and that our family is foolish for supporting them.”

“And who does Ato say our family should support?” asked Auntie.

“Ato and other children in the play yard said we should support the Duku clan. They laughed at me for being in a family that sides with the Baah.”

“The Baah and the Duku have hated each other for generations, and all the other families have been forced to pick sides” said Auntie as she set down her needle and thread. “Would you like to hear how this came to be?”

Kisi had not meant for Auntie to tell a bedtime story, but she loved her stories and rolled over to face Auntie attentively, “Yes Auntie.”

“Human families and clans are all descended from the age of animals,” responded Kisi who was familiar with arrangements of time and ancestry.

“That’s right,” said Auntie, “you know that unlike humans, animals live true to their nature. Humans can change their nature, but they start with the traits inherited from their animal ancestors.”

Kisi giggled, “Old Uncle Bodua must have descended from a boar.”

Smiling inside, frowning on the outside, Auntie said “You should not disrespect your elders so. Now listen up.”

Kisi’s outer face became stoic while trying to keep the image of Uncle Bodua with bristly hair and yellowed broken tusks on the inside.

“Many years ago, Brother Warthog and Brother Jackal lived together with their families in a village at the confluence of two great rivers. But as you know, it is Warthog’s nature to roam in the search for new places to forage. Warthog and his family wandered far and wide rooting, as warthogs will, for food in many faraway lands.

“The animals in these far away places were not used to the ways of Brother Warthog and some were offended by his habit of uprooting plants and toppling termite mounds. Brother Warthog and his family were chased from the other lands and soon had no place to go.”

Auntie had Kisi’s rapt attention. If her intent was to tell a story to lull her niece to sleep, she was not succeeding.

“While Brother Warthog was traveling far and wide, Brother Jackal’s wives had many children. Jackal’s children moved into the homes that had been left vacant by Warthog. After a while, there was almost no sign that the Warthog had once lived in the village. For those who did not know better, the village had become Jackal’s.”

Auntie went on, “Anansi made the most excellent weapons in a village down river from Brother Jackal’s village.”

“An Anansi story!” Kisi was delighted. Anansi stories were her favorite. The spider man/god was a trickster guaranteed to liven any story with his deceits and double-crosses.

Calmly ignoring Kisi’s outburst, Auntie continued. “Peace is not good for the weapon making business. To become rich and powerful, Anansi needed to sell many weapons. Peace had broken out for many years and business was bad. Anansi set out to fix the problem.

“Hearing about Brother Warthog’s wandering and banishment from far away lands, Anansi sought out Warthog. ‘Brother Warthog, why don’t you return to your home at the confluence of the two great rivers?’

“‘I would if I could, but it is told that Brother Jackal has moved into our former homes and has no intent to leave anytime soon.’

“‘I could sell you the most beautiful weapons and you could force Jackal from the land and take back the rightful ownership of your home,’ said Anansi.

“‘Anansi, what would you have me do? The situation you describe is truly unjust.’

“‘I can’t afford your weapons Anansi. And to make matters worse, the village is fortified with walls and guards on watch alert Jackal if I or my family approach.’

“Anansi was undaunted by Warthog’s concerns. He went to Elephant. ‘Brother Elephant, Brother Warthog has been treated so unfairly by animals who do not condone the ways of the Warthog. They have banished him from their lands. Warthog would return home, but Brother Jackal has forbidden his return and has fortified the village at the confluence of the two great rivers to keep him out. Warthog has been forced to wander. He is homeless and faces scorn wherever he goes. Would you be willing to help right this great wrong?’

“Elephant was the richest and most powerful of the animals. ‘You could buy my best quality weapons and equip Brother Warthog. His wanderings have left him destitute, and he cannot afford to arm himself.’ Elephant and Anansi haggled on a price, and soon Warthog had the best weapons in the river valley — made by Anansi. Warthog was ready to take back what was his, but was worried about the cost of assaulting the village walls. Anansi had a solution. He again sought Elephant. ‘Brother Elephant, Brother Warthog is now equipped to take back his home, but could use your help to trample down the walls Jackal has built.’ Elephant agreed to trample the walls.

“Warthog easily retook the village. He and his family stormed after Elephant as Elephant broke down the walls. Jackal’s weapons were of inferior quality to those wielded by Warthog and Jackal was quickly subdued. Like Jackal, Warthog’s family had also grown in numbers during the years they had wandered other lands. Their old homes were too few to hold such an enlarged family, so Warthog moved into Jackal’s houses. Many of Jackal’s family were forced to flee the village. Jackal erected camps on the outskirts of other villages along the river.

“Anansi was happy with the income from the fine weapons he’d sold to Elephant, but peace had come too quickly. Though Jackal would have been happy to contest the village, he did not have the means to acquire fine weapons. Anansi made a new plan.

“Anansi had a cousin in a nearby village who also made weapons. Anansi did not think they were as fine as the weapons Anansi made, but most people were not as expert in the details of weapon making as Anansi. Anansi made a deal with his cousin that if Anansi brought him customers, his cousin would share the profits with Anansi.

“Anansi sought Hippo. Hippo was rich and powerful, and being of the river, sympathetic to his long-time neighbor Jackal. ‘Brother Hippo, you can see that Jackal has been treated unfairly by Elephant and Warthog. Surely you would support Jackal returning to the village and taking back his home. He could leave the temporary camps he’s built outside other villages and people in the river valley would be happy.’ Hippo asked how he could help. His people were few in number, though wealthy. ‘Jackal’s family will take the risks,’ said Anansi.

“‘He needs someone like you to buy weapons for his people to have any hope of defeating Warthog’s superior arms. It would be unseeming for me to sell my weapons to Jackal since I’ve been supplying Warthog. But my cousin also makes fine weapons and I can put in a good word for you. On my recommendation, he would sell you the weapons at a good price to give to Jackal. Jackal will then defeat Warthog and return to his home.’ Hippo agreed to help Jackal.

“Anansi was very happy with the outcome. Warthog and Jackal, financed by Elephant and Hippo, fought each other for the rest of the age of animals. Anansi became rich and powerful. His cousin did pretty well too. The contest between Warthog and Jackal remained unresolved.”

“Did the animals pick sides like Ato and our family?” asked Kisi.

“Elephant and Hippo picked sides, but the rest of the animals were neither sympathetic nor supportive of Warthog and Jackal. Many animals did tire of the constant warring and wished it would all come to an end. Picking sides happened during the age of humans.”

“Why do humans pick sides Auntie?”

“Some people say that after the current age of humans, there will be an age of peace and prosperity. The catch is that there is a gate that only people deserving of the good life will be able to pass. During this age, we have to make the choices that will allow us to be judged worthy to pass through the gate. We have to choose right from wrong, good from bad, and just from unjust”.

“According to Ato and the other children, my family has made the wrong choice, and we won’t pass through the gate.”

Auntie asked, “Do you think you are a bad person Kisi?”

Kisi slowly shook her head no.

“I know you don’t think much of Uncle Bodua, but do you think your kin are bad people?”

Still shaking her head, Kisi grew thoughtful. “If the Baah and Duku made peace, we wouldn’t have to pick sides, would we Auntie?”

“Anansi has tricked us into picking sides girl. Should we let him trick us into fighting with our friends?”

Kisi lay thinking how tomorrow she would introduce Ato to Esam of the Baah clan. Both boys were good footballers. Kisi thought they could become friends.

A collection of Anansi tales read by the author in an 8th grade grammar class. The class was a miserable affair, but the stories struck a chord and stuck.

For the names used in the story: https://buzzghana.com/ghanaian-names/