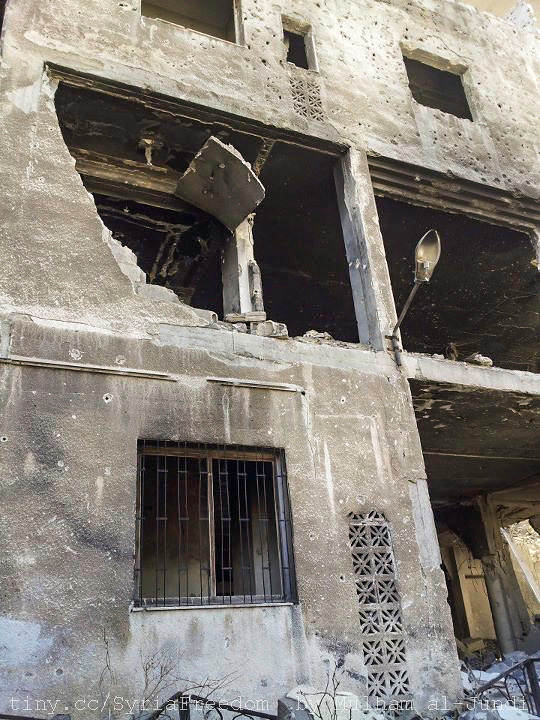 This is the final installment of a serialized story. It may be read on its own, but preceding it with Deep Holes A,  Deep Holes B, and Deep Holes C may provide a more satisfying experience.

Sergeant Robson yanked the cellar door open, revealing a young hijab clad woman with two small children cowering behind her. Robson extended a hand toward the woman. She seemed momentarily stunned by the bright morning sun, and he thought she and her children needed help to navigate the three steps leading up from the dark refuge.

Robson was in charge of an infantry squad assigned to clear a residential block of any residual resistance after the previous night’s heavy shelling. The door was discovered on the alley side of a half-collapsed shell-pocked two-story brick residence.

As he leaned into the space, the woman lunged at him, her right arm extended. Robson fell back, the side of his face opened by an arcing utility knife. Primed with combat adrenaline, as Robson fell back, his thumb instinctively levered the selector to automatic. He sprayed the cellar with his M4.

Searing pain and the taste of blood flowing down his face onto the mottled battle dress, bullets impacting small dancing bodies, the crumpled still shapes and smell of cordite in a confined space. For years, the high definition images have interrupted his sleep and intruded on every aspect of his life. A stranger’s glance lingers a little too long on the jagged scar. A small child points with wide frightened eyes holding onto her mother’s leg.

Robson rages at himself and the system that turned him into a killer of women and children. That rage was his undoing. After an honorable discharge, he’d drifted from one construction job to another. An unfortunate confrontation on a job site with a smart ass and a pipe wrench resulted in a dead smart ass. Robson was tried and sent to the notorious Deep Hole Camp to serve a fifteen-year sentence. From what he’d experienced of the camp so far, it might as well have been a life sentence.

Robson throws back a thin sheet and swings his legs off of the molded plastic bed in the predawn light. The looping images ensure that sleep is no longer an option. Even so, this is the best time of day. The Trustee bunkhouse is relatively quiet in the early morning. The snoring and heavy breathing have leveled to a sonorous din. The desert air is cool, almost comfortable. Robson can spend the next few minutes meditating on his condition before the other Trustees awake and begin their relentless senseless chatter.

It’s hard to tell how much time he’s already served. Prisoners work 24 × 7 removing debris from the Hole. Deep underground, there is no way to track the passage of time. Robson is sure that it had taken months to work his way up the shaft and into daylight. When he’d first arrived, he’d used his experience leading an infantry squad to organize the fourteen men that comprised the digging team at the very bottom.

Earl, Bob, and that pain-in-the-ass non-stop talker Zippy, and himself were new arrivals replacing four veteran face crickets who rode the bucket up the shaft. Former Sgt. Robson wanted to make sure that when the time came, he and his companions rode the bucket upshaft alive. He set the men to working in efficient shifts that sustained the steady upward flow of debris. The four accidental companions all survived their time in the Hole and, after many sets of replacements, had eventually been promoted to the sun scorched surface.

The Deep Hole Camp trials of human endurance persisted on the surface. At least the days could be measured by the passage of the sun. Robson knew that he’d spent 374 days pushing or pulling a cart filled with debris from the Hole to the top of a massive waste heap. The cart was dumped, the altitude of the pile increased by one small measure, and the cart returned to the gaping gash in the desert to be filled again. The eternal darkness of the Hole was replaced with blinding light and heat and the rigor of amassing what convicts called Mount Deep Hole. Many Deep Hole Camp inhabitants survived the horrors of the pit only to succumb to heat stroke and dehydration on the surface.

It must be about two years, Robson estimates, since he, Earl, Bob and Zippy arrived in their ox-drawn wooden cage. He reflects with satisfaction that no one has learned his real name. His prison nom de guerre is Scarface. Robson doesn’t mind the nickname. Unlike the civilian world, the ugly gash gives him a useful gravitas among the prisoners — that and the fact that he is large and muscular. He’d begun shaving his head in the military, affecting an aggressive outward persona he’d carried into civilian life. Some wit in his rifle squad had begun calling him RoboSarge, and the name had stuck. Razors are not allowed in Deep Hole Camp. RoboSarge’s gleaming crown has been replaced by blond bristles, now bleached white by the sun.

Robson does not seek confrontation; he mostly wants to be left alone. But when challenged, he does not back down. Though he does not show it, he is happy when Zippy amplifies Scarface’s tough guy image with exaggerated truths: such as the execution of a malinger, which really was an exhaustion-induced errant swing of a pick ax. With Zippy spreading rumors, Robson’s journey up the shaft was fairly friction-free, most men avoiding Scarface altogether. One scuffle on level three had resulted in a dipstick from Pittsburgh — Demarius? — taking the final dive into the pit. No one saw a thing.

Scarface had earned the respect of his fellows. His promotion to Trustee was at the expense of former Trustee Paco. Paco had been supervising a three-man cart team through the steps for routine axle maintenance. Frustrated that the idiots couldn’t get it together, Paco crawled under the cart to demonstrate the procedure. The axle fell on his chest. The abdominal damage was magnified by the cart team’s ham-handed extrication efforts. Paco spent the night in the camp’s infirmary followed by an eternity residing in the growing God’s field at the camp periphery.

Trustees are prisoners that have been entrusted by the camp administration to run the camp. No civilians live at Deep Hole Camp. Camp activity is monitored by strategically placed video feeds as well as aerial drones. Messages are sent and received from a prefab comms shed. Chuck the Puck is the head Trustee. He and his lieutenant Lester run the camp’s day-to-day operations. When the Trustees nominated Scarface to replace Paco, Chuck sent the nomination to the Warden back in the world. The nomination was approved and Scarface became a Trustee. He moved into the relative comfort of the Trustee bunkhouse with its molded beds, roof, and ventilation fans. The food was a little better. A small kitchen garden supplied delicacies like potatoes not available to the broader population. Robson thinks that his survival chances are much enhanced with the promotion.

The quiet morning evolves into the rowdy daily chaos as night shift Trustees arrive seeking their day shift replacements. Lester enters the building and interrupts the commotion with loud but languid “LISSEN UP!” Robson is always impressed by Lester’s command presence. A simple hayseed phrase, a quiet room, and all eyes are fixed on Lester.

“Chuck gots some textual intercourse from the Man he needs you all to hear.” Lester’s got everyone’s attention. “Relax the cacks’ til everyone here.”

The night shifters continue to drift in, but no one leaves the room to begin the next shift. When everyone is accounted for, Lester orders Doogie to “Go fetch Chuck.”

News From the World

Chuck enters the quiet bunkhouse, a tablet in hand, his face devoid of expression. He reads from the tablet:

“The increased temperatures experienced by internees at Deep Hole Camp due to the Earth’s Geothermal Gradient is leading to unsafe working conditions in the lower reaches of the excavation.” Chuck looks up to see eyes rolling.

Chuck continues reading from the tablet. “Starting today, all digging shall cease.”

The bunkhouse erupts with cheers. Chuck holds up his free hand to silence the Trustees. Still smiling, they quiet down and Chuck reads on:

“All personnel and equipment will be removed from the shaft. Equipment will be stored in an orderly fashion so that it may be reused at a later date.” Chuck halts while the room draws a collective breath — It isn’t over?

“They want another hole!?” a Trusty exclaims loudly in disbelief.

Chuck drills the perpetrator with his dead black eyes, then ignores the outburst and returns to the tablet:

“Bureau of Prison engineers will visit Deep Hole Camp, select and mark a new site for excavation two. In the meantime, Trustees are instructed to organize internees to fill excavation one with waste material.” Expansion pops and creaks are the only sound as the early morning sun heats the bunkhouse roof.

“Whatchya wait’n for? Git out and spread the good news to your teams,” says Lester with an evil grin.

Later that morning, Robson is saddened when he learns that Bob, a member of his original replacement party, joined six others in hurling themselves into the Hole.

A senseless gesture to capstone a futile effort, he thinks. There’s a limit to how much good news a man can take.

Bombed out building – “Building E-government, which was bombed troop Assad to accuse by Free Syrian Army !!!” by FreedomHouse is licensed under CC BY 2.0

Dawn at Deep Hole Camp – “DAWN” by nooccar is licensed under CC BY-NC 2.0